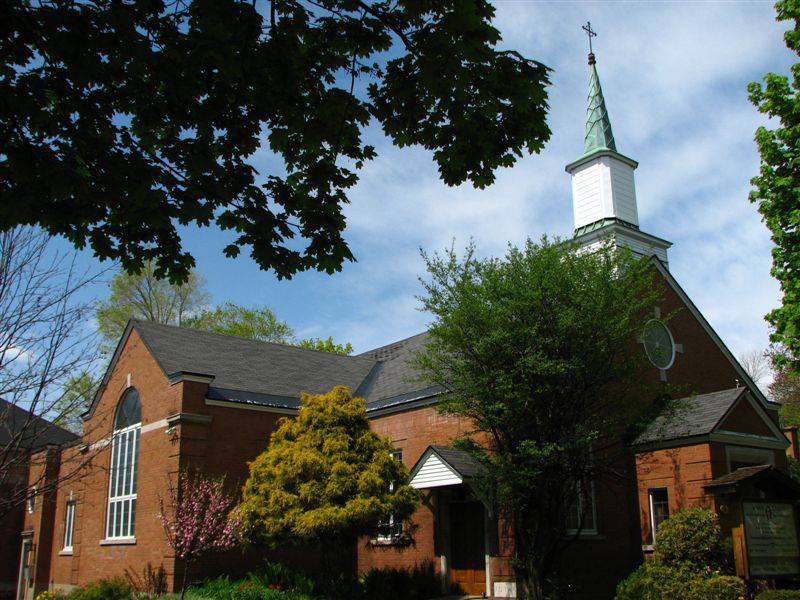 Protestant church services had been happening in Ste Anne de Bellevue since the 1860s but it wasn’t until Macdonald College was built, in 1907, including a College of Teachers graduates of which would be responsible for teaching in protestant schools throughout Quebec that a serious need for a permanent church with a place for teaching religious instruction became a priority. In the years prior to the construction of a church building, services were held in the Assembly Hall of the College. At one of these services, entitled “Mastery for Service”,Macdonald College Principal Robertson was so inspired, and through him Sir William Macdonald, that the sermon title became the College motto.

In the summer of 1913, Union Church opened its doors. The original building, Adair Hall, was constructed with the expectation that a ‘real’ church would be built in the near future. However, two world wars and the Depression intervened and the actual church was not built for another 35 years.  The United Church of Canada did not exist in 1913 (which is why ‘United’ is NOT part of the church’s name).

Thus a minister from each of the founding denominations (Methodist, Presbyterian,and Congregationalist) served in rotation.

Many of the church members served in World War I and when the Ste Anne’s Military Hospital was established in 1918, Union Church basement was fitted up as a place of entertainment for the patients. By the 1940s population growth in the area brought Sundays when Union Church could not accommodate all who came to its doors and in 1948 a new church building was added to Adair Hall. During the 1950s, membership in the church rose to 800 and two morning services were required to meet the demand.

Music has always been a strong part of Union Church. From the 1920s, a choir made up of students and staff from Macdonald College, soon grew to include other local young people. From 1962 until 2009, Brian Powers Smith was the music director and under his leadership a wonderful choir thrived and grew. The choir continues under Pierre Gallant, who has directed them (and others) in 8 wonderful “Road Shows” and several Cabarets. Union has also had a band:  ‘Spare Parts’ made up of ‘spare’ musicians in the church community who play several times over the course of the year and inspire us with relevant modern music.

Through the years, Union Church has remained an active part of the local community. Boutique 24, selling good used clothing and household items in the lower hall, has been raising money for local charities and schools since 1982. The West Montreal Readaptation Centre has a group who make Union their home and who have, over the years, become friends to many of us. Union is also home to the Ste Anne Singers, and the Lakeshore Chamber Music Society which has held performances in the sanctuary since the 1950s.  The Coffee House & Blues Concerts are in their 26th season and take place in Adair Hall the last Friday of the month.  Support for Fair Trade and other social justice issues, an Earth Day service at the Morgan Arboretum, and fundraising for a broad base of charities including the West Island Palliative Care Centre, Animatch and the Stephen Lewis Foundation have also become trademarks of Union Church over the years.