All of us believe that living your life decently is possible!

We highly encourage and ask you all to share Merging Waters with all of your friends, colleagues, and relatives, as we all need spiritual light in our life!

Our church has a long schedule of fascinating and deeply spiritual events, all to boost your serenity! Visit our church and meet dozens of new friends, all of whom follow the “love thy neighbor” principle! Altogether, we guarantee you that after becoming a part of our acceptive and loving community there will be so much more light in your life! 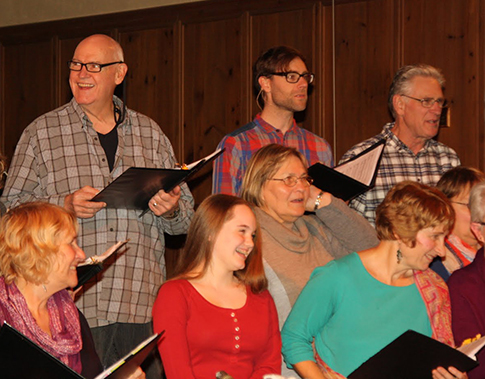 The story of how Union Church and Beaurepaire United Church became Merging Waters Pastoral Charge, actually has its roots in the years prior to the more formal meetings which began in 2012. The two churches had already joined together to share Church services over the summers with one month covered at Beaurepaire and the other at Union. As such, we already had experience of worshipping together. However, the more formal process began in the summer of 2012 when a sub-committee was formed with the mandate to explore various options for us to share. The needs at that time were financial for Union Church with Beaurepaire struggling with declining numbers in the congregation.

I have come to think of the process that we followed as one similar to that of a developing relationship between two people – we started with the “getting to know you” phase during the summers of shared services. We then moved into the more serious “ getting to know you” phase that included discussions of what each of us was willing to do, to compromise, to contribute to a more serious relationship. This phase started in May 2012 with a committee that included Mae McGibbon, Stephen Pickford and Linda Toivenen from BUC and Jim Fyles, Jan Langelier and Kathie Whitehead from Union. Rev. Ron Coughlin acted as the facilitator. This committee met 5 times between June 13 and Sept. 6, 2012. The committee considered various options for cooperation between the 2 churches which were then presented to both Boards for input. This phase took place through the late Fall of 2012.

Then in early 2013, we moved into the transition phase which started in March 2013. This was what I refer to as the dating phase. Then after several months of work, the engagement was ready to be confirmed. In Sept. 2013, the Boards of each Church (the parents) were presented with the proposal for the marriage and once this was approved, the JNAC team was chosen to find what we needed as a married couple to be successful. From January 2014 onwards, the needs and wishes of the 2 congregations were identified culminating in our calling of Vicki Cowan as our Minister of the Merging Waters Pastoral Charge – the wedding!!

The Church year of Sept. 2014 – June 2015 proceeded as originally planned with some services done jointly at one church or the other but other services done separately with Vicki travelling between them. The next year, we decided to experiment with alternating services every week and this has been the case ever since. Settling in as a family!!

So now we are once again at a crossroads. With Vicki announcing her retirement in July 2018 and the realization, even before that decision, that we needed to look carefully at our future, we will need to look forward again. However, we are doing this together this time. We will probably have some big challenges moving forward but I believe that our marriage is solid and the changes we will need to face can be beneficial for us all.